In anticipation of our soon-to-be-released album, The Pheromoans invite you on an immersive journey into the mysterious realm of our oeuvre...


on May 13, 2019
Email ThisBlogThis!Share to TwitterShare to FacebookShare to Pinterest

The Pheromoans have started work on their fifth album in Lewes. Nobody knows when or by what method this album will come out.  New songs from it will be performed at a number of music festivals this summer including Kendal Calling, Electric Fields in Dumfries and Festival No. 6 in Portmerion.

on June 21, 2017
Email ThisBlogThis!Share to TwitterShare to FacebookShare to Pinterest 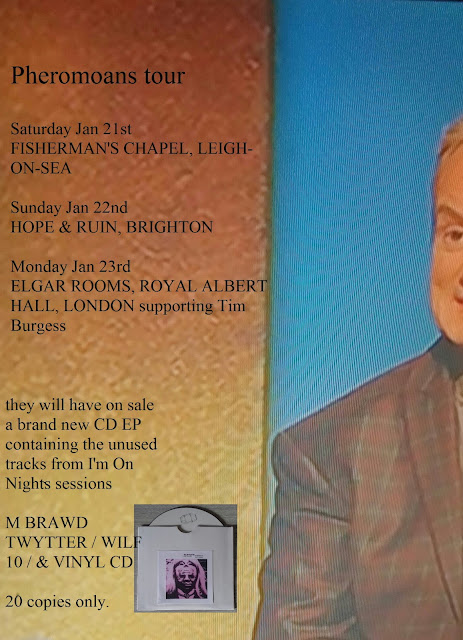 on January 14, 2017
Email ThisBlogThis!Share to TwitterShare to FacebookShare to Pinterest

Reviews of our latest Long Player here on the Quietus as well as Dusted and A Ship in the Woods.

on July 23, 2016
Email ThisBlogThis!Share to TwitterShare to FacebookShare to Pinterest 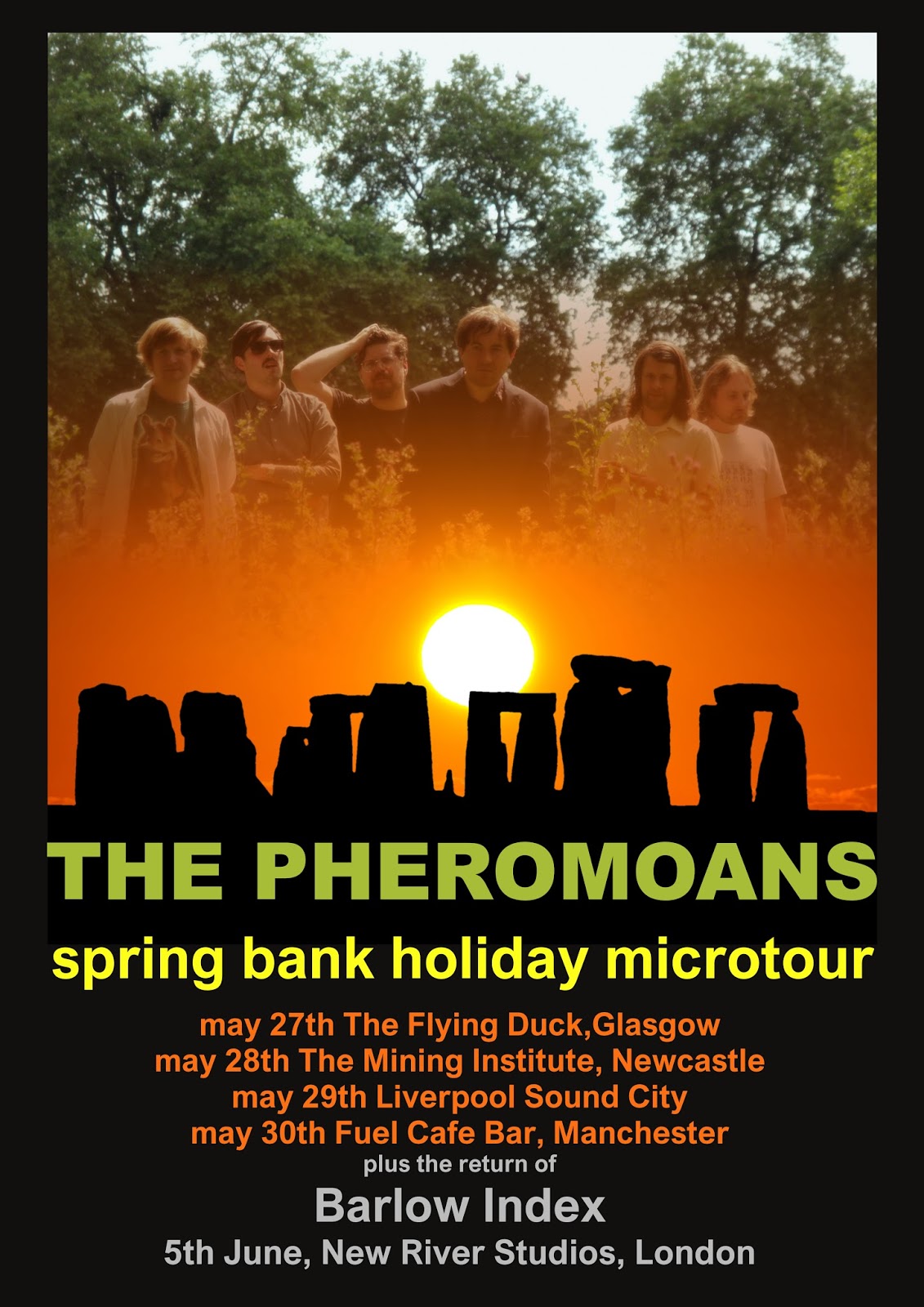 on May 07, 2016
Email ThisBlogThis!Share to TwitterShare to FacebookShare to Pinterest

The Pheromoans are hosting the fourth Barlow Index on June 5th. Another afternoon start, for laid back leisure. No roast dinners available - no wellies. 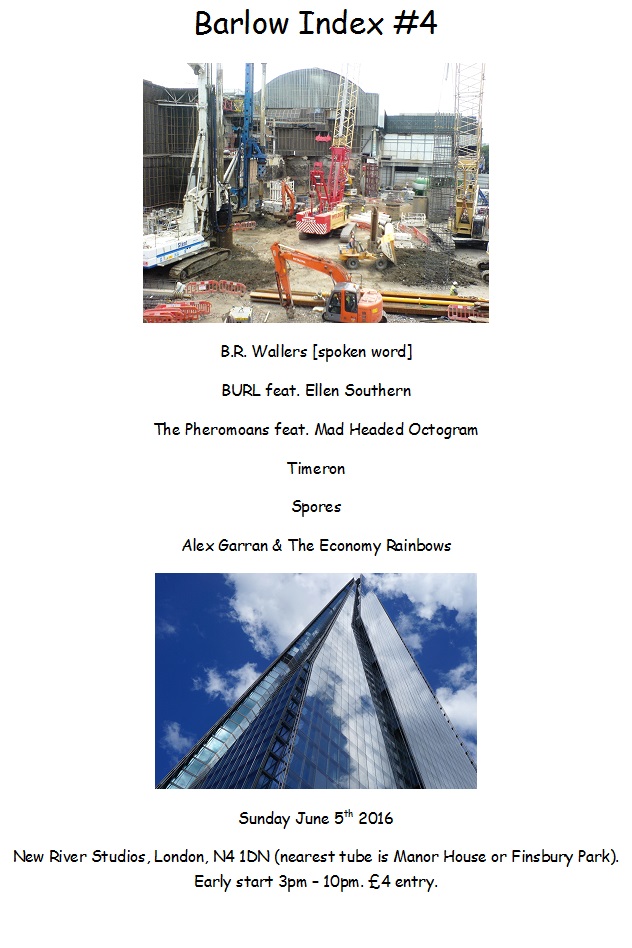 on May 04, 2016
Email ThisBlogThis!Share to TwitterShare to FacebookShare to Pinterest 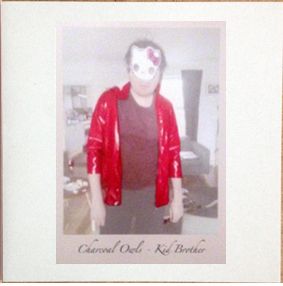 
Vicky Langan. A special one-off England performance by heroic sound/visual artist Vicky Langan, from Cork, Ireland. “Irish artist Vicky Langan has gained a reputation for raw and intense performances that are as likely to leave audiences feeling deeply unsettled as profoundly moved. Langan both embraces and projects vulnerability, offering an intimate physical theatre loaded with personal symbolism and unguarded emotion. With a focus on the sounds of the body and its functions, involving contact-miked skin, amplified breath and live electronic manipulation, Langan’s work sits between sound and performance art.”- Daniel Spicer, The Wire magazine

Blood Stereo. Dylan Nyoukis and Karen Constance are a British institution, the sound complete immersion for people who don't immerse easily. Idiot twins Burchill and Slim may behave as though they own Sussex, but Constance and Nyoukis are immune to their surroundings, making livid eyes at confused glitter vixens up and down this squalid Isle.

Claire Potter is an artist and writer from Merseyside whose book Mental Furniture (2014) is published by VerySmallKitchen. At this event Claire Potter will perform Lads of Aran, an essay performance using two slide projectors. Inserting voyeuristic found photos of lads, into stilled scenes from Robert J Flaherty's 1927 ethno-documentary Man of Aran, Claire Potter moves through a series of notes, quotations and anecdotes in an attempt to decode the figure of the lad and consider its emancipatory potentials. Frances Morgan writes 'her urgent, prickly delivery reminds you of how infrequently such regional voices are heard in underground music and performance, especially when they belong to women, whose vocals are more likely than men's to be shrouded in reverb, made glassy and affectless… Potter's voice is inescapable, compelling you to listen to what the subject of her writing has to say.'


Formed at underworld lynchpin Digby Coroner's send-off, Ravioli Me Away have been turning heads with several releases of essential tracks, and those heads haven't looked back ever since in their pursuit of good-time racket and loveable Norfolk shit. Invisible chords and a barely concealed contempt for the powers that be are all fair game when RMA hit town. The lyrical content was pseudo political.


Charcoal Owls consist of Tom James Scott and Russell Walker and create music for the masses via a mixture of essential and non-essential tracks which are steeped in the peculiar traditions of Hayes neo-soul. Their releases include Tin Roof (2014) and Coventry Campbell (2015) and have a forthcoming double A-Side 7" appearing on I Dischi Del Barone in early 2016. This is only their third ever performance and the first since 2010.


The master of ceremonies is the divisive figure of the newly toned Mad Headed Octogram, whose musings on life come by way of a distinctly rockist filter.

on October 20, 2015
Email ThisBlogThis!Share to TwitterShare to FacebookShare to Pinterest

Charcoal Owls (Russell Walker and Tom James Scott) released their Tin Roof LP this year on Night School, with contributions from Rose Keeler-Schäffeler & Jean Noël Rebilly, and now bring you a brand new track not featured on the album, recorded as a free festive download.


on December 20, 2014
Email ThisBlogThis!Share to TwitterShare to FacebookShare to Pinterest

Banned From The Foxy

Good afternoon thrill-seekers, I hope this finds you well. Unfortunately the Pheromoans are no longer playing the gig at Village Underground in London tonight as planned, as the headliners Foxygen have banned us from finishing the tour.
Their reason for taking this step was due to a paranoid theory developed by some of their session men, that someone from our band had either hidden, or stolen(!) some of their 'electrical cables.' As I wouldn't know an electrical cable from a Eagles cover band, I am a bit mystified by the whole affair. In our eight years on the rock circuit, we have never stood accused of stealing anything other than alcohol. And while I can't speak for the fellow members of my rock act, I for one have enough junk in my house as it is without adding someone elses musical equipment to it. 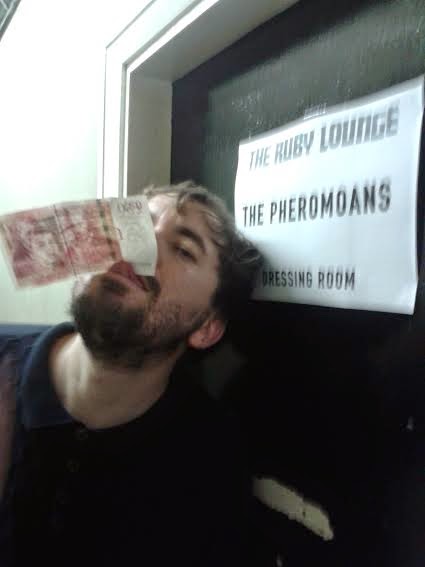 So anyway, once I was informed of this by their slightly sinister tour operator, I later received a message from someone calling himself 'Fort William.' Fort writes in quite a quaint, Sargeant Major-type tone, peppering his world weary wisdom about the pop world, with high-handed commands relating to some items that, in his mind, we had stashed away in a Manchester Premier Inn suite. Apparently something called a 'rock pedal' had been lost by one of the nine-piece's most prominent axe-grinders, no less (found it yet guys?)
'Howday Fort,' I replied, 'I realise you have a bee in the old bonnet regarding the way your lads keep losing their gizmos, but please do not accuse me of stealing, as I am a law abiding citizen.' Fort dismissed this as the typical words of a crook, and went to claim in his inimitable fashion (tissues at the ready now folks) that he was 'one of the only people in the world to care about the Pheromoans'! I must say this peculiar piece of information cheered me up no end, and has made the whole experience worthwhile. As the last two nights have not paid very well (I think some of their fans had got lost on the way to the venue), we were hoping that tonight's London hoedown would help to recoup some of the money we lost on travel and accommodation, but there you go.. if we have been able to contribute anything at all towards Fort and Foxygen's pursuit of the big time, then I can sleep soundly... no doubt while Fort drives around the Cadillac around his ranch, cackling and performing outrageous wheelspins, mentally adding up the dollars he has made from this tour, the Pheromoans on full blast...
on October 31, 2014
Email ThisBlogThis!Share to TwitterShare to FacebookShare to Pinterest

Click here to read an interview with Inégale magazine.
on September 29, 2014
Email ThisBlogThis!Share to TwitterShare to FacebookShare to Pinterest